Travel around a neighborhood after a storm and you will see tree limbs, large and small, scattered about the ground. Why do some limbs fall in high winds or after ice storms while others merely bend? Should you worry about that large limb overhanging your driveway? 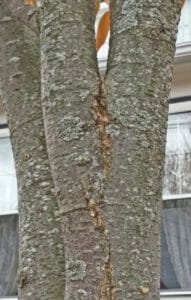 “One reason trees fail is weak branch unions,” says Tchukki Andersen, BCMA, CTSP* and staff arborist with the Tree Care Industry Association. “Homeowners can educate themselves about tree limbs, but they should call a professional arborist if they are worried about an overhanging branch.”

A weak branch union occurs when a branch and stem (or two or more co-dominant stems) grow so closely together that bark grows between them, inside the tree. The term for bark growing inside the tree is “included bark.” As more and more bark is included inside the tree, the greater the likelihood that this weak union is likely to fail.

An epicormic branch, by its very nature, forms a weak union because it has a shallow attachment instead of being attached all the way to the center of the stem. Epicormic branches grow very quickly so they become heavy very quickly. After a time they lose their connection to the main branch and may fall to the ground because the underlying wood cannot support their weight.

“If a weak union is also cracked, cankered or decayed, the union is likely to fail, causing the branch to fall off the tree,” says Andersen. “Sometimes, ridges of bark and wood will form on one or both sides of a weakened branch union in order to stabilize the union. The branch is very likely to fail when a crack forms between the ridges.”

A professional arborist can assess your trees to determine if limbs may be in danger of failing and should be pruned or removed.

If you are anything like me, you have noticed where your home loses heat in...
Read More
Everyone knows that summer temperatures are cooler in the shade. But when the leaves are...
Read More
Have you ever wondered if the large trees by your house would fall on it...
Read More
Heavy snow and ice, as well as frozen soil conditions, can damage cherished trees and...
Read More
We all enjoy the appearance of freshly fallen snow on our landscape trees. It’s a...
Read More
With Thanksgiving being tomorrow that means that Friday marks the beginning of the Christmas season....
Read More
Last week we shared some things that can be done in the fall to benefit...
Read More
Last week we talked about things to consider when you are planting trees or planning...
Read More
Even though summer is winding down and fall is upon us, now is a good...
Read More
We get asked two questions a lot, what is a Certified Arborist and why...
Read More

Cleaning up Storm Damaged TreesThe Dangers of Tree Trimming and Tree Care to Homeowners
Loading Comments...